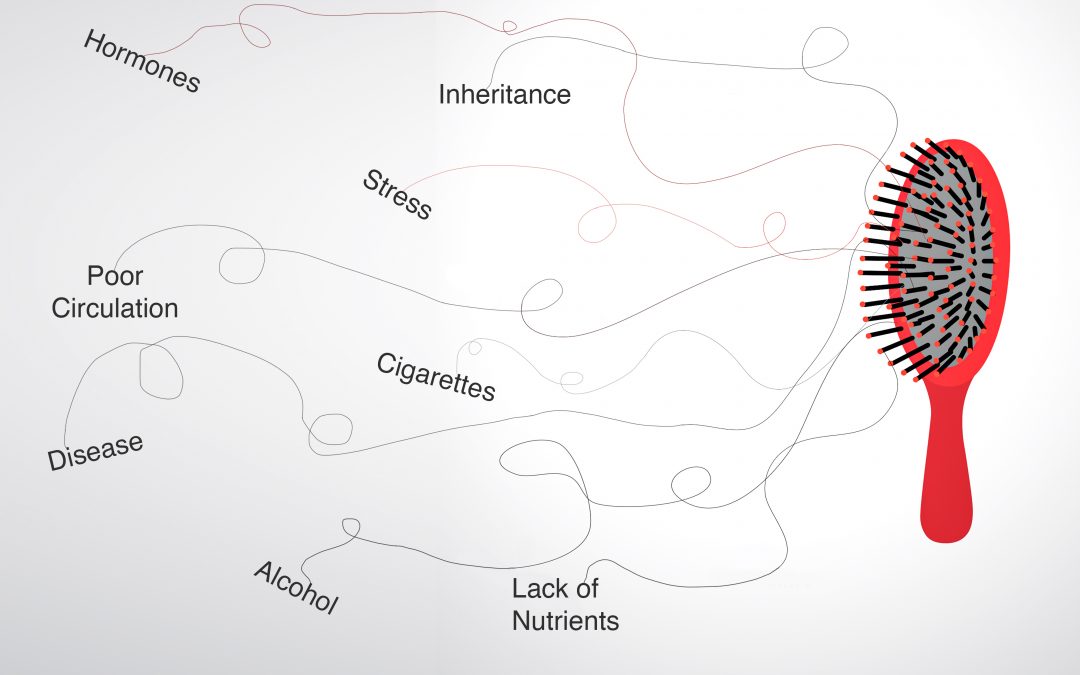 Androgenic alopecia (AGA) is the most common type of hair loss. It can affect both men and women, but it is clearly more common in men and shows different patterns according to sex. Men pattern baldness shows a recession of the hairline in the temples and increasing hair fall in the crown of the head, while for women, it begins as homogeneous hair weakening and increased shedding at the part. However, as the problem evolves, both sexes present pronounced hair loss in the crown, and women’s hairline can also recede a little.

AGA affects 80% of men and 50% of women around the globe, showing more incidence in Caucasians than in darker skin tones. In men, it often manifests after the age of 20, whilst in women it tends to start after their 40s or beyond.

THE ROLE OF HORMONES

For men, the main culprit for AGA is the hormone Dihydrotestosterone or DTH. This naturally occurring androgen hormone is made from testosterone by the enzyme 5-alpha reductase. Being an androgen hormone, it is, for obvious reasons, higher in men. Nevertheless, it is still present in women, but for them, the triggering hormonal factor is a combination of hormones, among them, DTH. For this reason, women with hair loss predisposition often start suffering it with menopause due to hormonal imbalance. More precisely, a drop in estrogens during menopause triggers the production of androgen hormones.

As we already explained in our older entry Hair Shedding v Hair Loss, the hair life cycle is divided into three stages: the anagen is the active growth phase that lasts up to 6 years; then, the hair stops growing and the bulb shrinks, it is known as catagen phase and lasts for 2 or 3 weeks; finally, during the telogen phase, the hair strand and bulb are inactive and waiting to fall. In high amounts, DHT degrades the hair follicle, which causes shortening of the anagen phase and hair lifespan.

People with androgenic alopecia family history seem to be more prone to developing the condition. However, the role of inheritance is still unclear. Several studies and scientific research have shown that the Androgen Receptor (AR) is the main gene involved and that an increased expression of this gene plays an important role in the development and worsening of AGA.

Stress and poor blood circulation in the scalp can also trigger and worsen men and women hair loss as it leads to a lack of nutrients in the hair follicle. Therefore, cardiovascular disease and bad habits like cigarettes, alcohol, or too much caffeine, can have an impact on blood flow and promote hair fall.

Although this condition tends to be less severe in women than in men, we highly recommend to both sexes to treat it as soon as possible to stop hair fall or at least slow it down. Keep in mind that once the follicle is too degraded, it is very unlikely for new hair to grow.

As there are quite significant differences between men and women hair loss, INNOAESTHETICS® proposes a gender-specific treatment that has shown to be highly effective in improving and slowing down the condition.

INNO-TDS® HAIR LOSS CONTROL is a transdermal solution for male androgenic alopecia that effectively inhibits DHT in the scalp and promotes blood flow around the follicles, enhancing the arrival of nutrients.

INNO-TDS® HAIR VITAL is a transdermal solution for female androgenic alopecia that controls the effects of hormonal imbalance in the scalp and promotes the arrival of nutrients to the hair follicle.

Any cookies that may not be particularly necessary for the website to function and is used specifically to collect user personal data via analytics, ads, other embedded contents are termed as non-necessary cookies. It is mandatory to procure user consent prior to running these cookies on your website.